What Can Data Science Tell Us About the Democratic Debates? 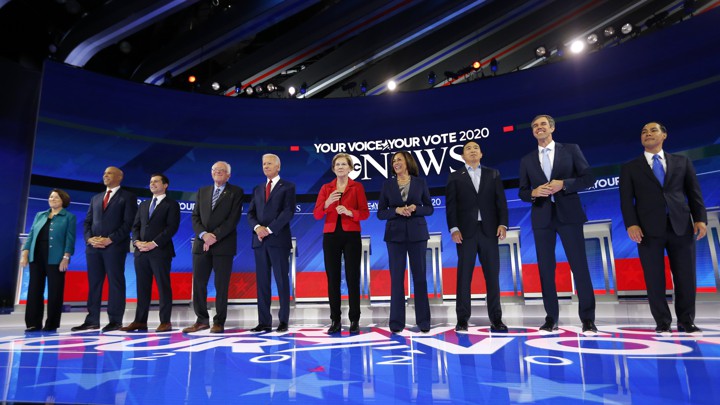 In the past year there has been 6 democratic debates with a total of 22 candidates who have spoken 181864 words for a total of 14 hours, 47 minutes and 24 seconds.

With so much content, I find it’s often difficult to make sense of what’s happened.

This blog post aims to tell the story of the democratic debates through data.

Along the way I hope to demonstrate some techniques in machine learning, natural language processing, and data science. Techniques that we can use to make sense of this data.

Note: The dataset is downloaded from Rev which is a transcription service that provides full transcripts of the debates for free.

First, let’s take a look at how long each candidate spoke over the past 6 debates:

On average, each time a candidate spoke, they were only able to speak for 22 seconds. The median is 21 seconds. This certainly doesn’t not seem like enough time to explain complex policy proposals.

What’s more telling though, is the relative amount of time each candidate spoke. 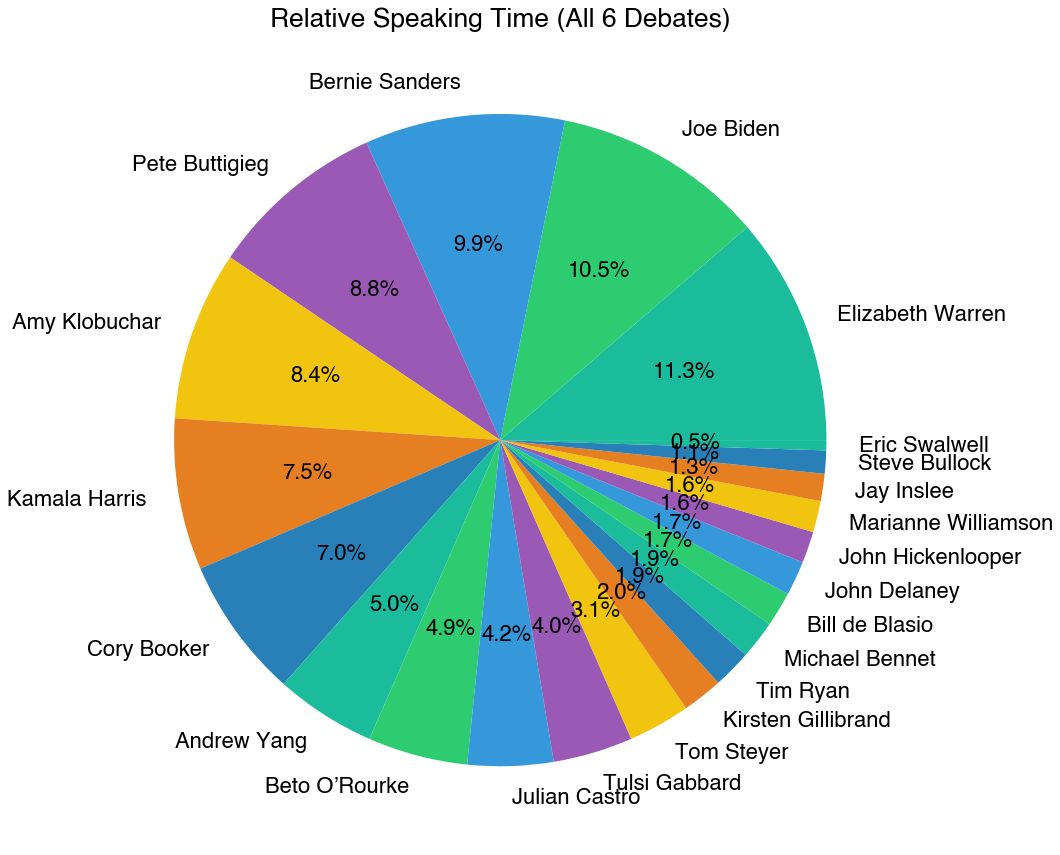 Obviously part of this comes from the fact that many of the candidates only appeared in one or two debates. Looking at the first debate, the time is much more balanced: 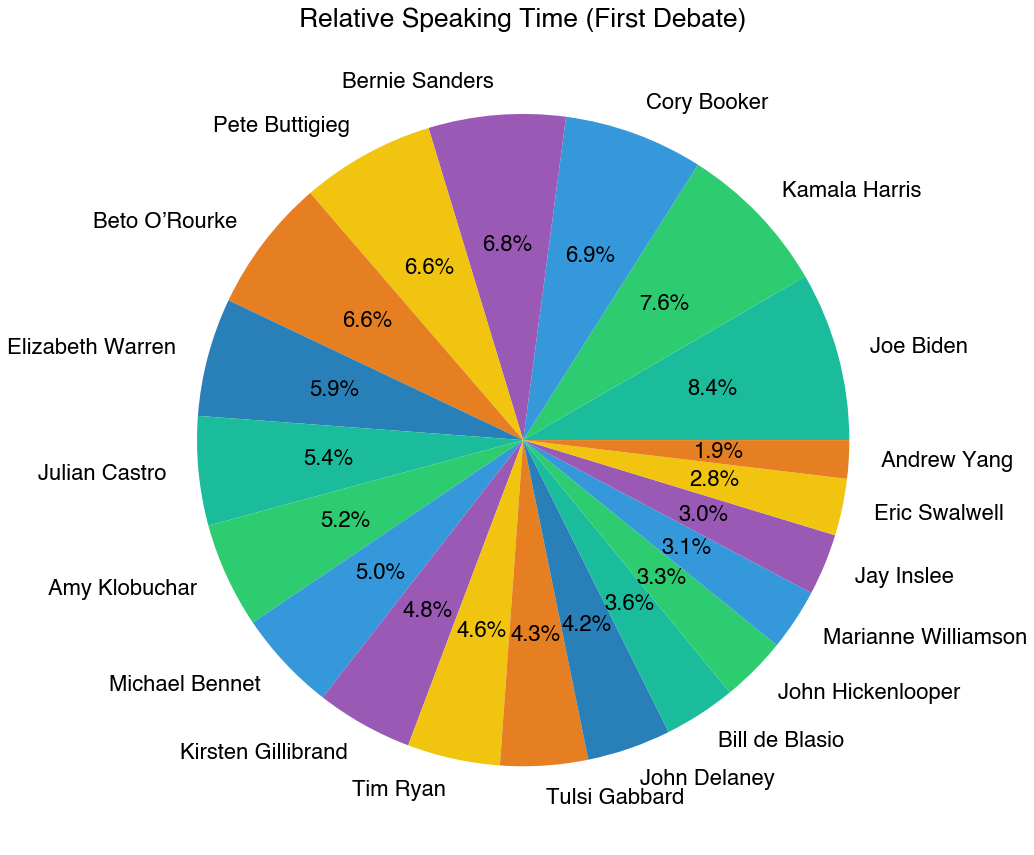 Do networks have a bias for popular candidates?

Note: The polling data is downloaded from Real Clear Politics

We intuitively understand that candidates who poll higher are given more speaking time. But how true is this? For every candidate, I plotted their poll number against how much time they spoke for each debate. 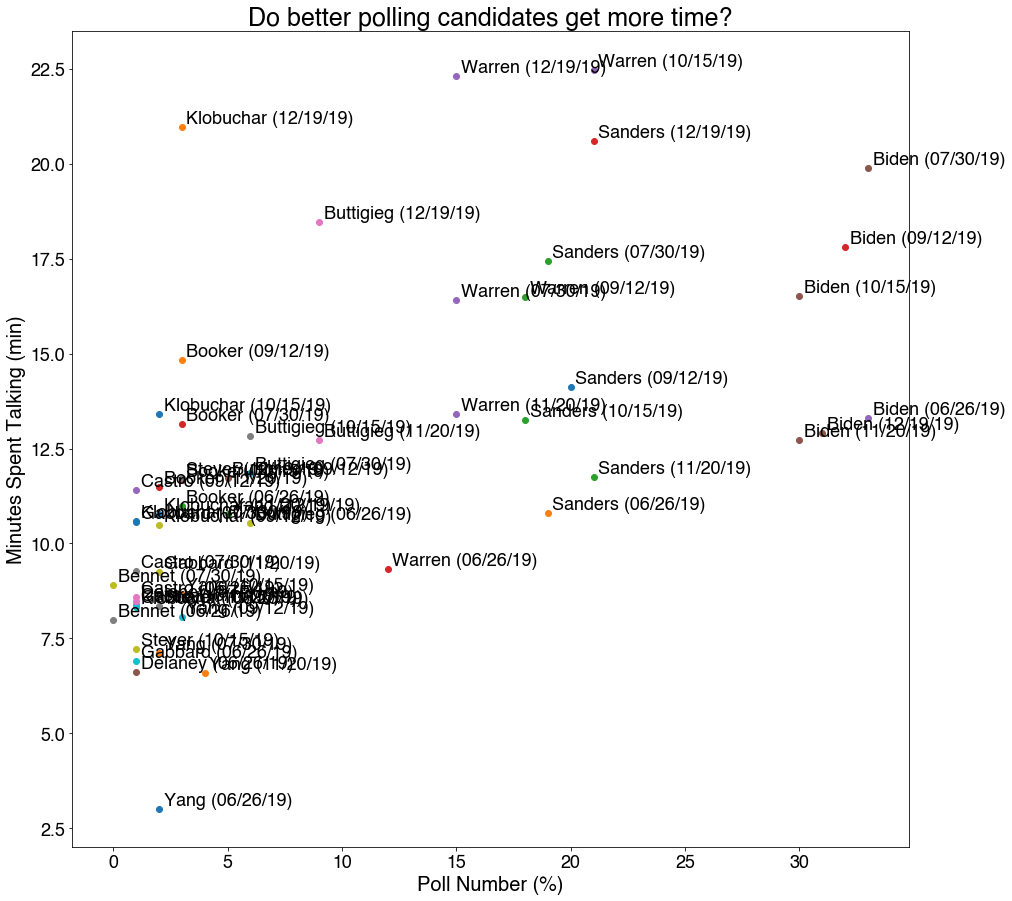 In general, this trend holds true with an r-squared score of 0.369. There are however, some notable standouts. The top left corner are candidates who don’t poll well, yet had a lot of speaking time. Senator Klobuchar polled at around 2% during Sixth debate, yet spoke almost twice as much as Joe Biden, who was polling at 32%.

An r-squared score can tell you how correlated your data is. A score of 1 means perfect correlation, and a score of 0 means no correlation. 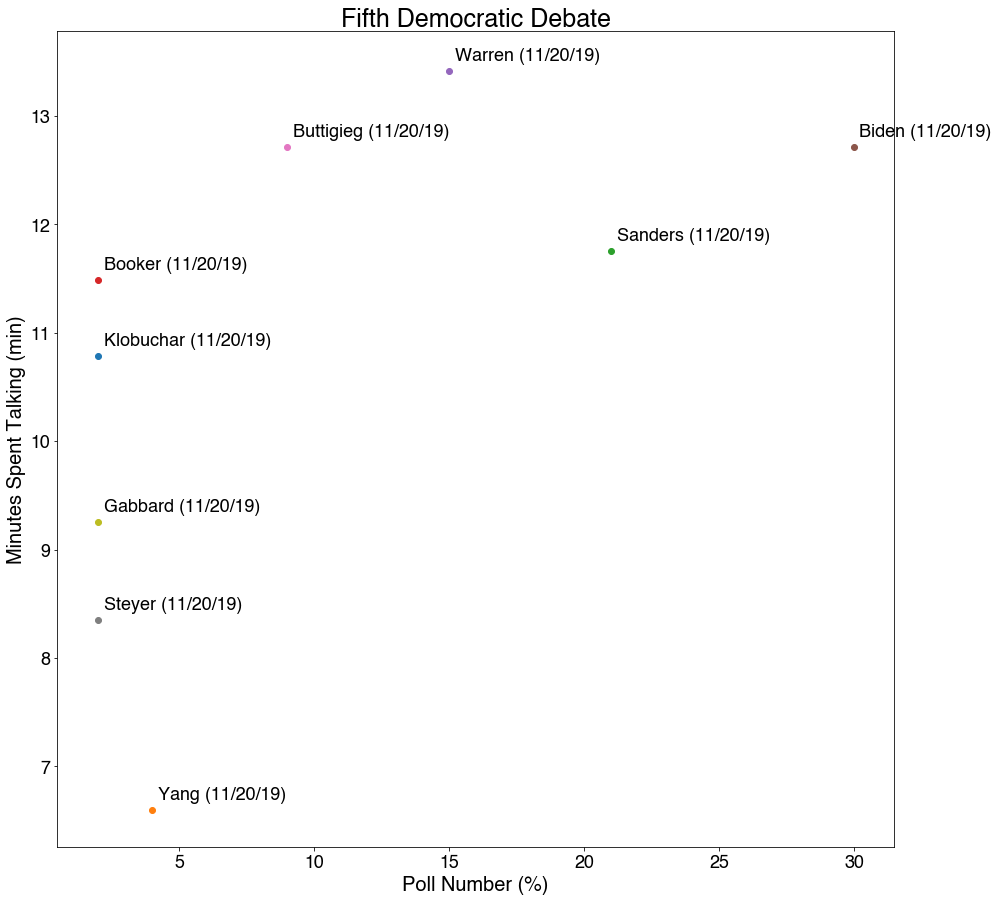 Andrew Yang polled better than Booker, Klobuchar, Gabbard, and Steyer, and yet only spoke about 6 minutes out of a 2 hour debate.

Which network followed this rule most closely? 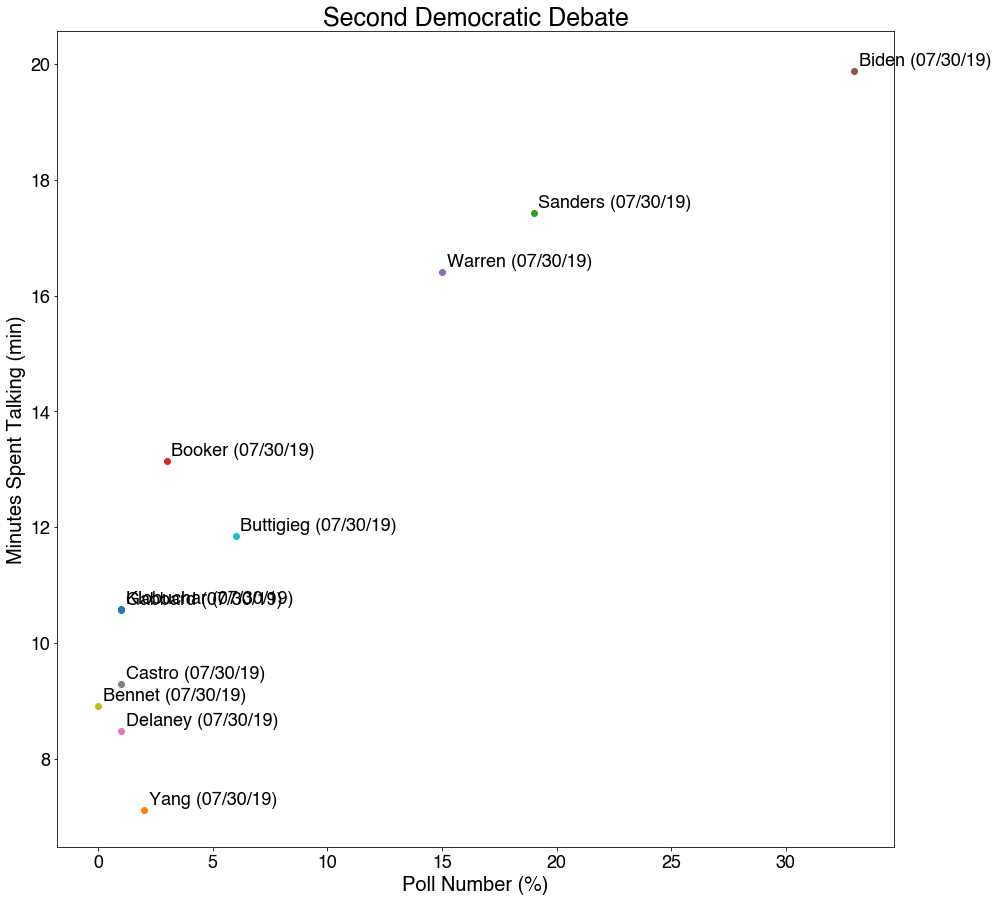 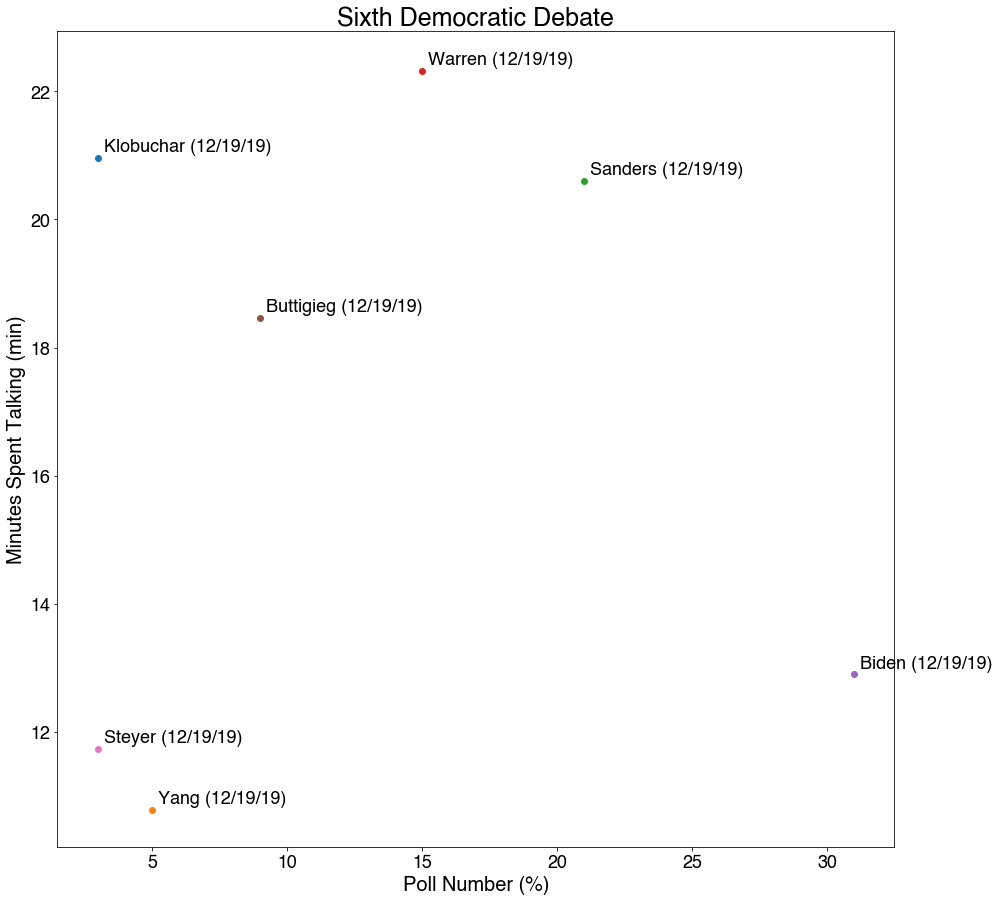 In general though, it seems if you can make it onto the stage, you’ll get at least 7 - 10 minutes of speaking time, regardless of how well you poll. Except for Andrew Yang, who spoke for a measly 3 minutes during the first debate. If I had to stand through a 3 hour debate to talk for just 3 minutes, I’d be pissed too. 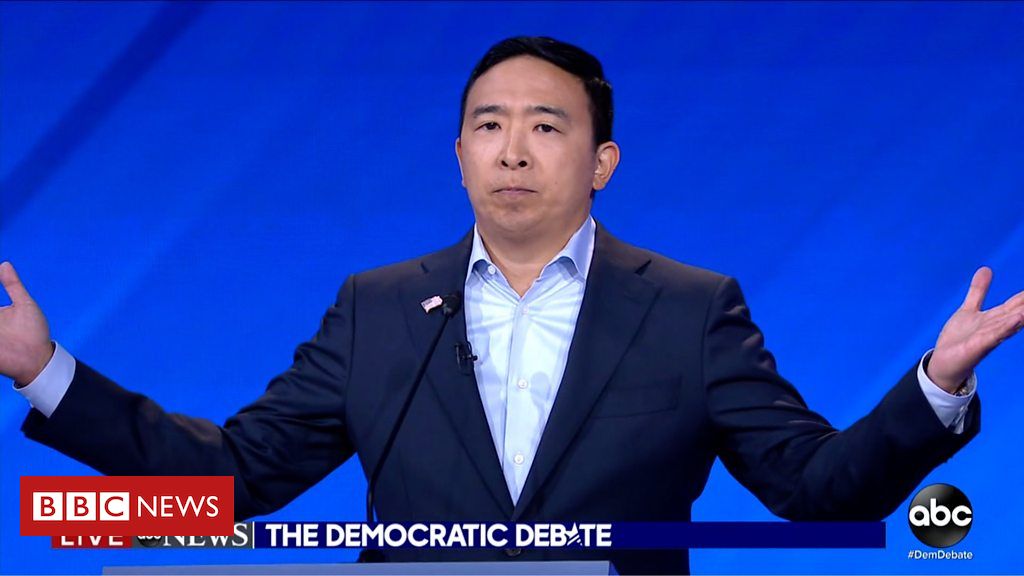 On the issues facing America

I trained a text classification model to predict whether a blurb of text is about one of:

Big thanks to the Snorkel team for building the tools to make this possible.

“My response is Obamacare is working. The way to build this and get to it immediately is to build on Obamacare”

The model predicts HEALTHCARE with 94% confidence.

We can use this model to get an idea of how much time each candidate spends talking about the different issues listed above.

Here is how the democratic candidates allocated their speaking time in aggregate: 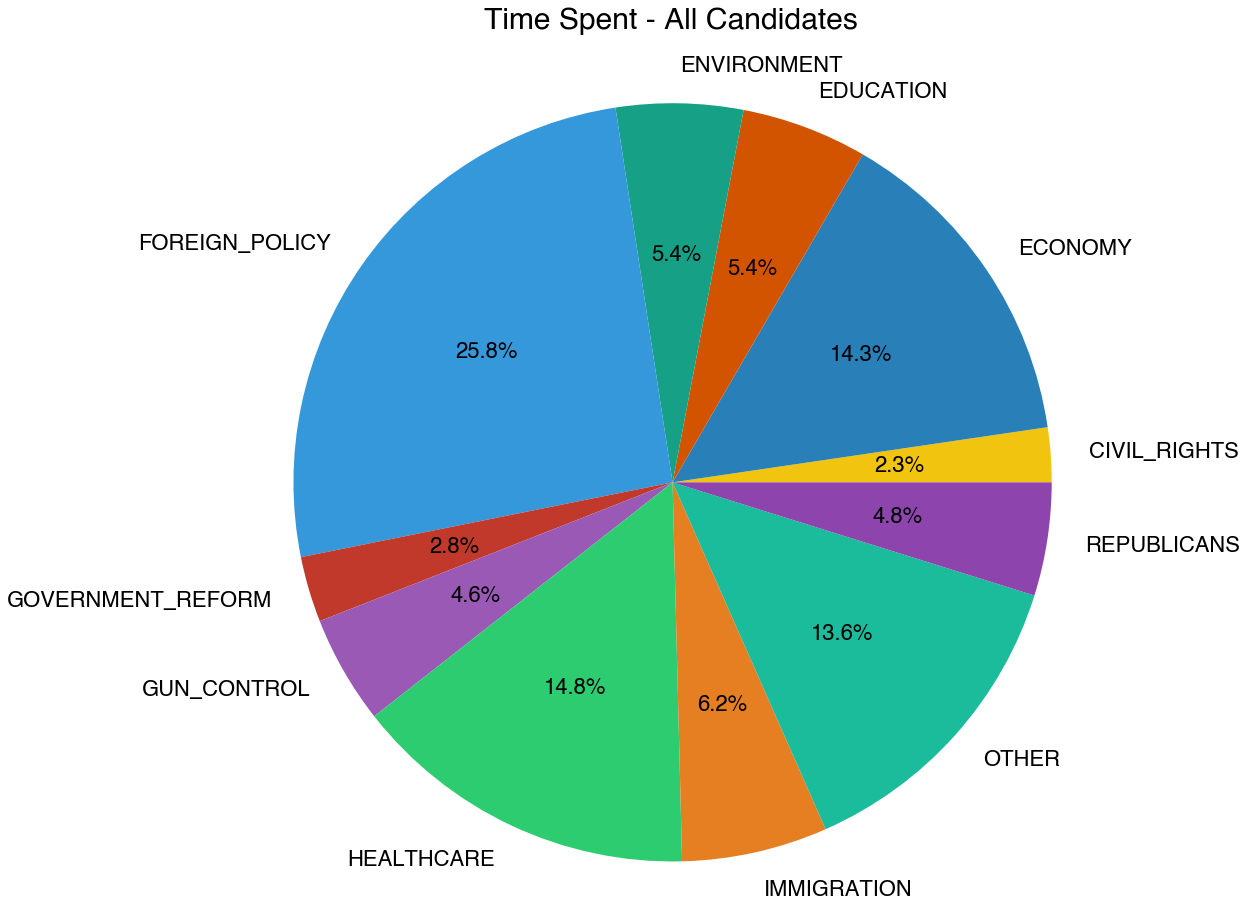 With most of the time being allocated to foreign policy, the economy, and healthcare. 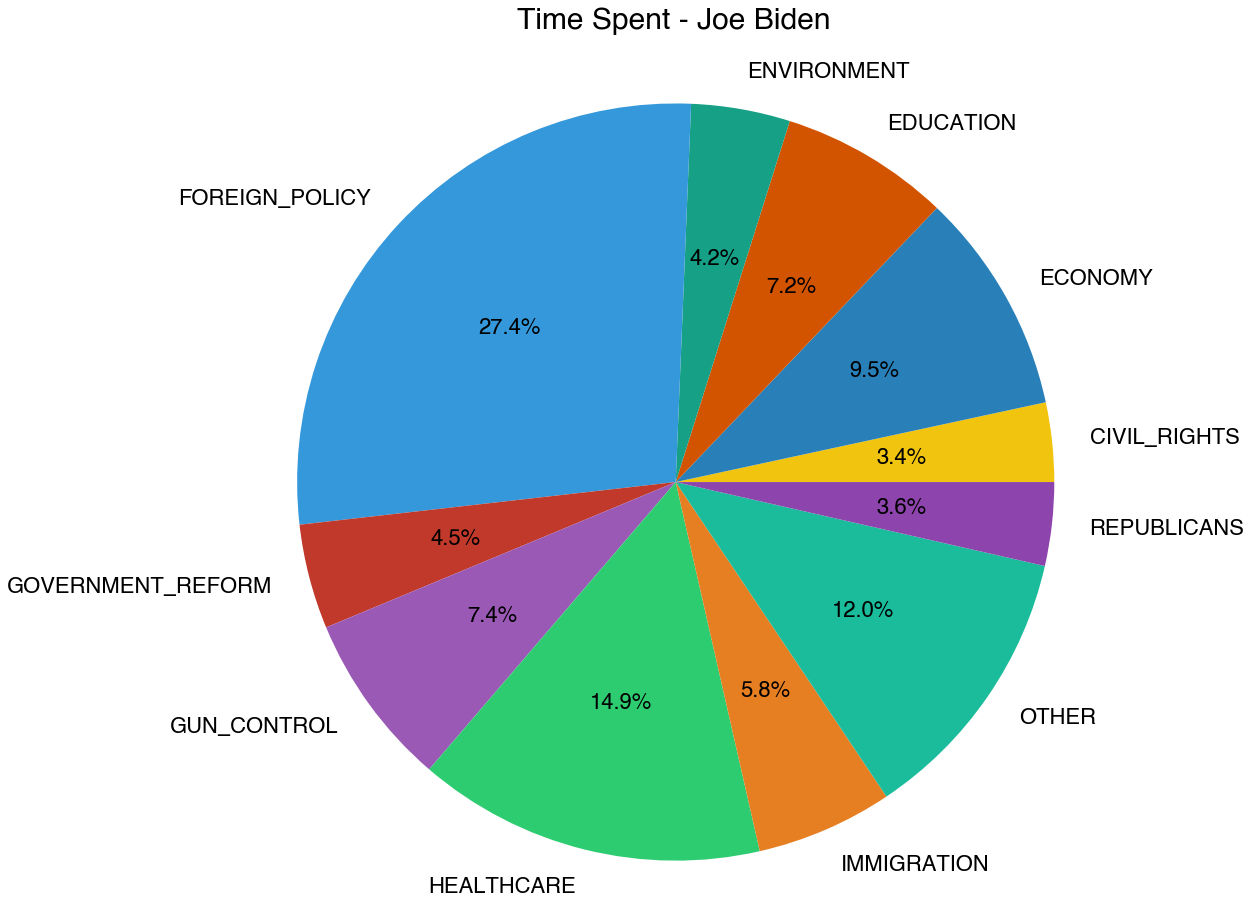 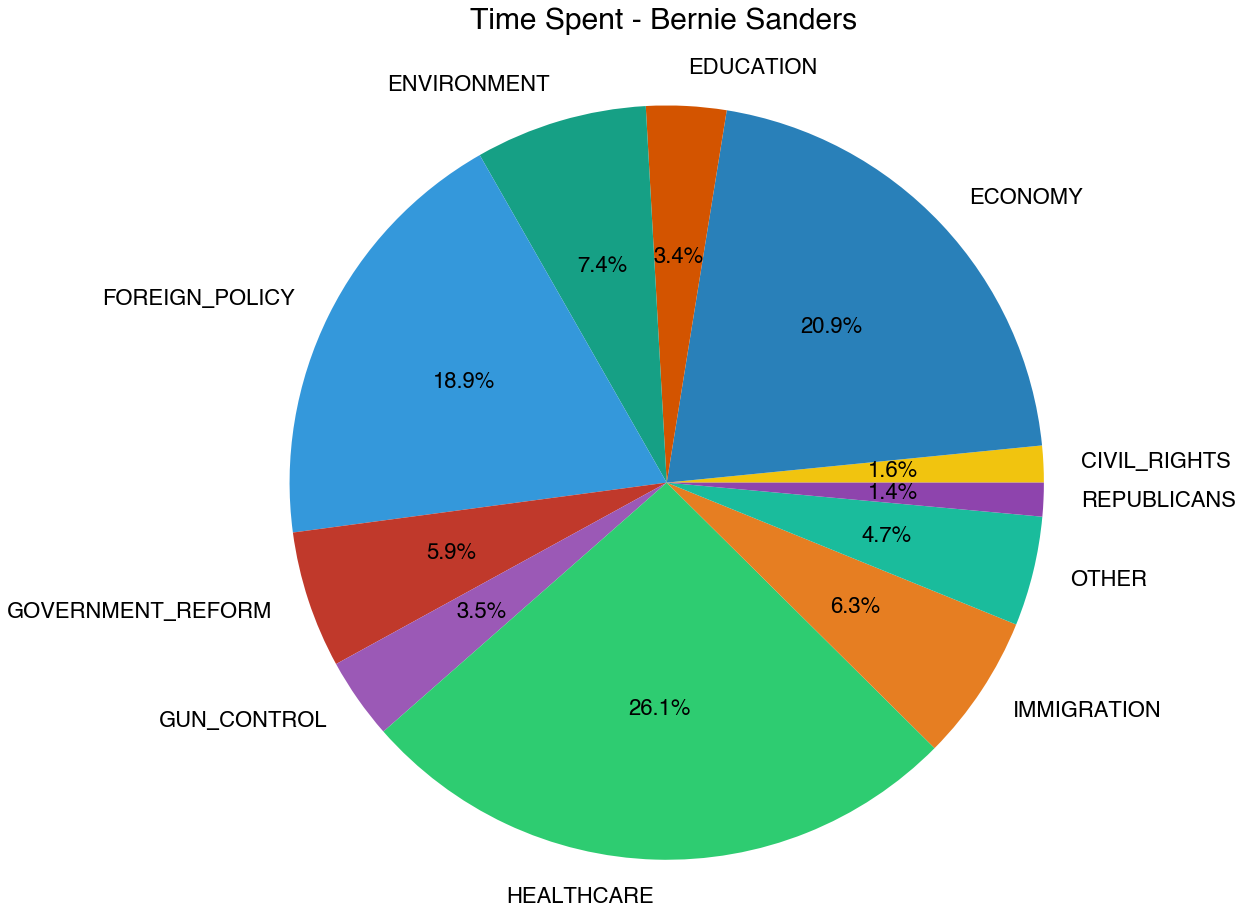 Elizabeth Warren seems to have the most balanced time allocation of all the candidates, spending more time than others talking about government reform and education. 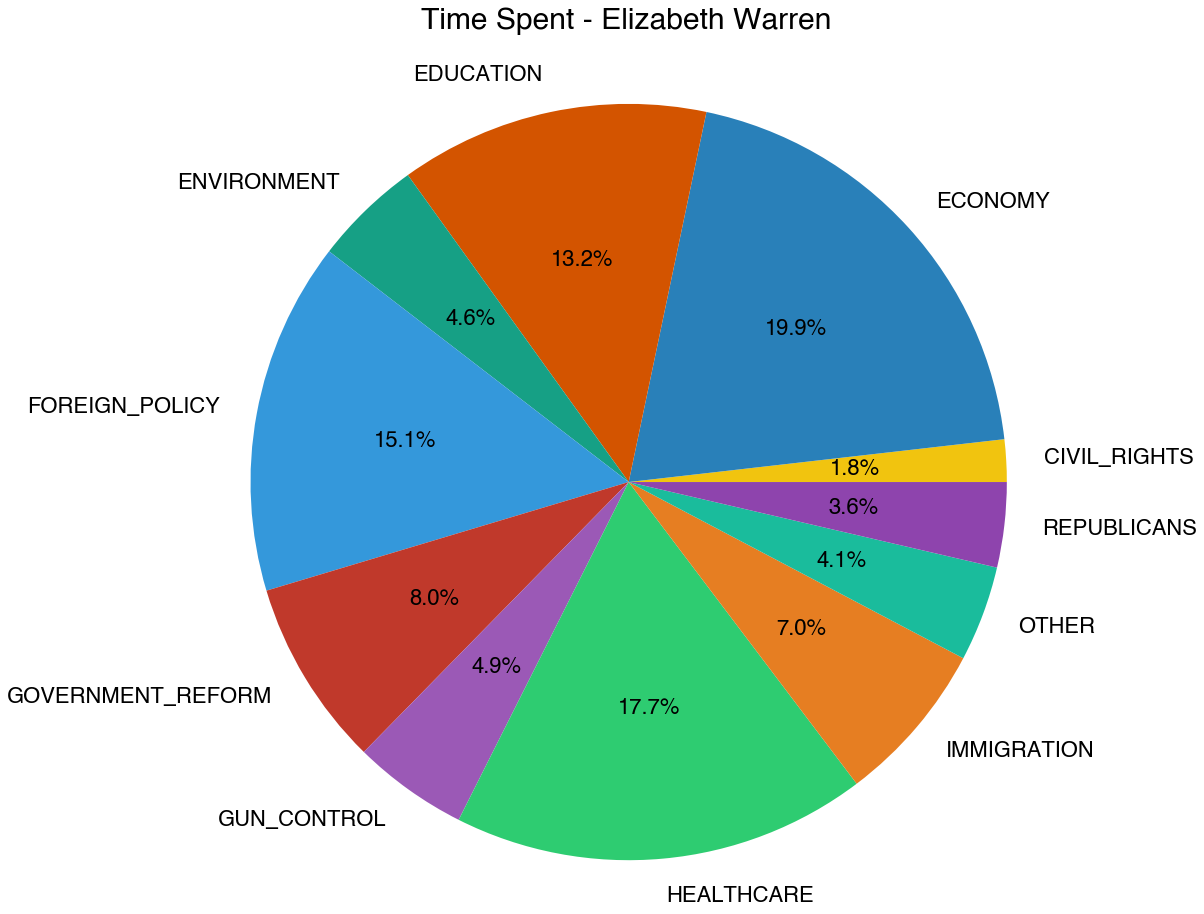 I won’t bore you with 22 different breakdowns since many of them look very similar. However there are some notable exceptions.

A few candidates spend a disproportionate amount of time (relative to other candidates) on specific issues.

Andrew Yang’s platform is based on establishing a universal basic income, which is reflected in his coverage of the economy. 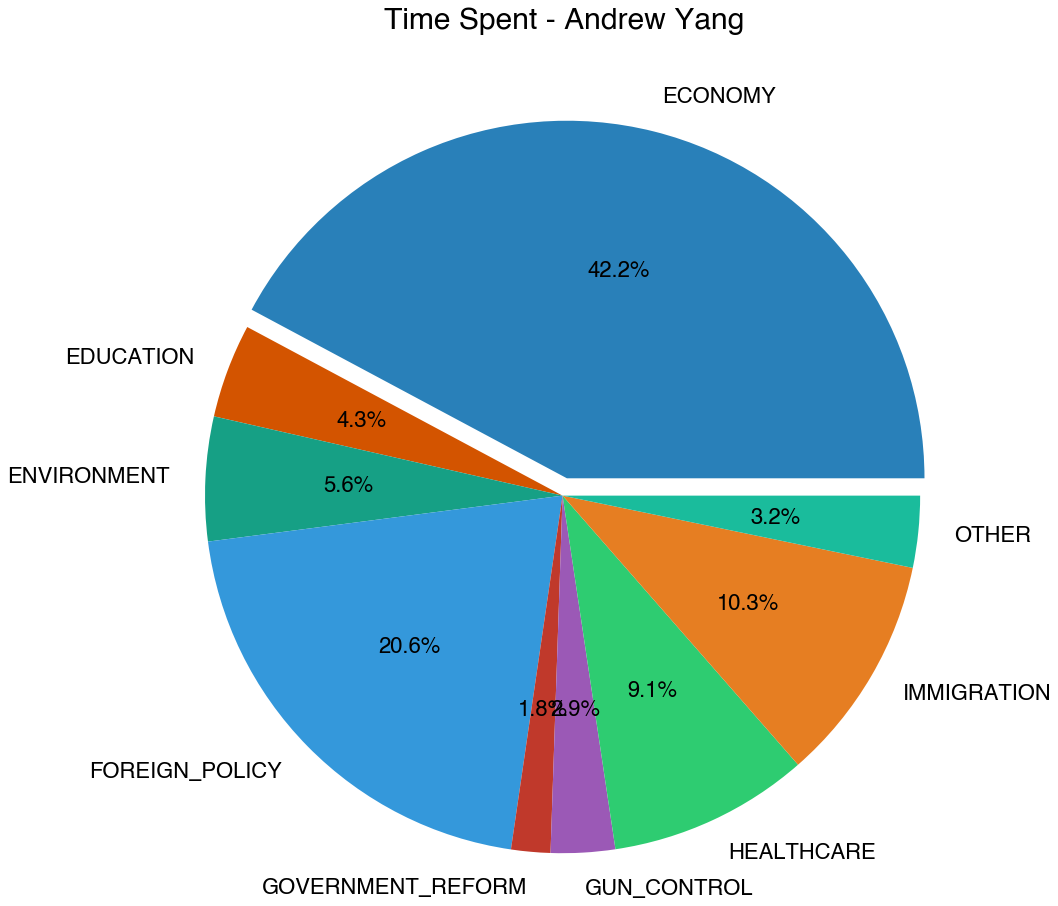 Tom Steyer is a businessman who became a climate activist, so he tends to speak more about the economy and the environment. 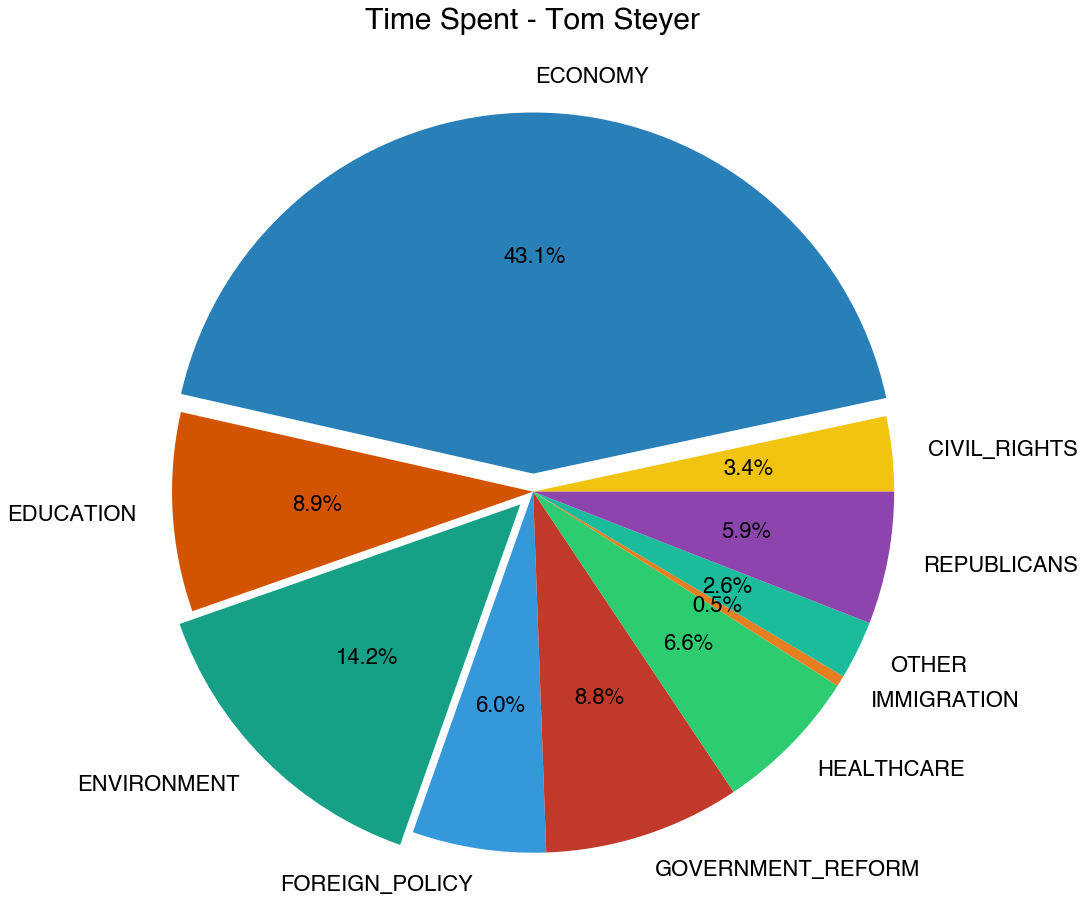 But everyone pales in comparison to Tulsi Gabbard, who spent almost two thirds of her time talking about foreign policy. Understandable, given her background as a veteran who served in Iraq and Kuwait, and a fierce opposition of American interventionism. 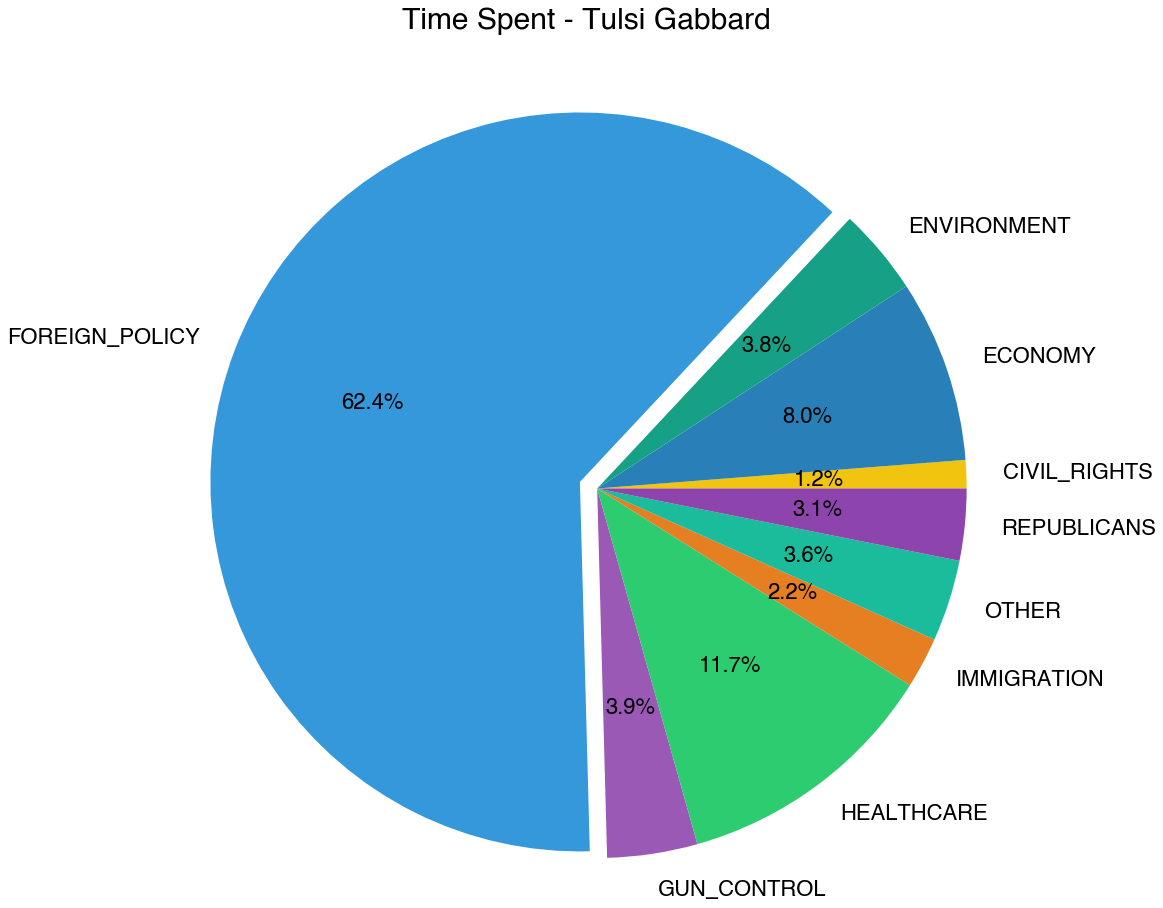 Dammit Joe, can you just let me finish?

When I was in elementary, I joined our schools debate club. Actually my parents made me join because they thought it would help with public speaking (it didn’t). The topics were less consequential, like whether zoos should exist or whether chores had a positive influence. (We also were given more than 23 seconds to make a case). I don’t remember much because, like other kids in that club, I never attended. But, I vaguely remember a rule against one debater interrupting another.

It certainly seems on the big stage, there are many instances of one candidate interrupting another. How often does this happen and are some candidates more eager to interrupt than others? I defined an “interruption” as a candidate speaking without being asked a question by a moderator.

Of the 14 hours and 47 minutes the candidates spoke, 55 minutes, 31 seconds of that was one candidate interrupting another.

Here are the worst offenders: 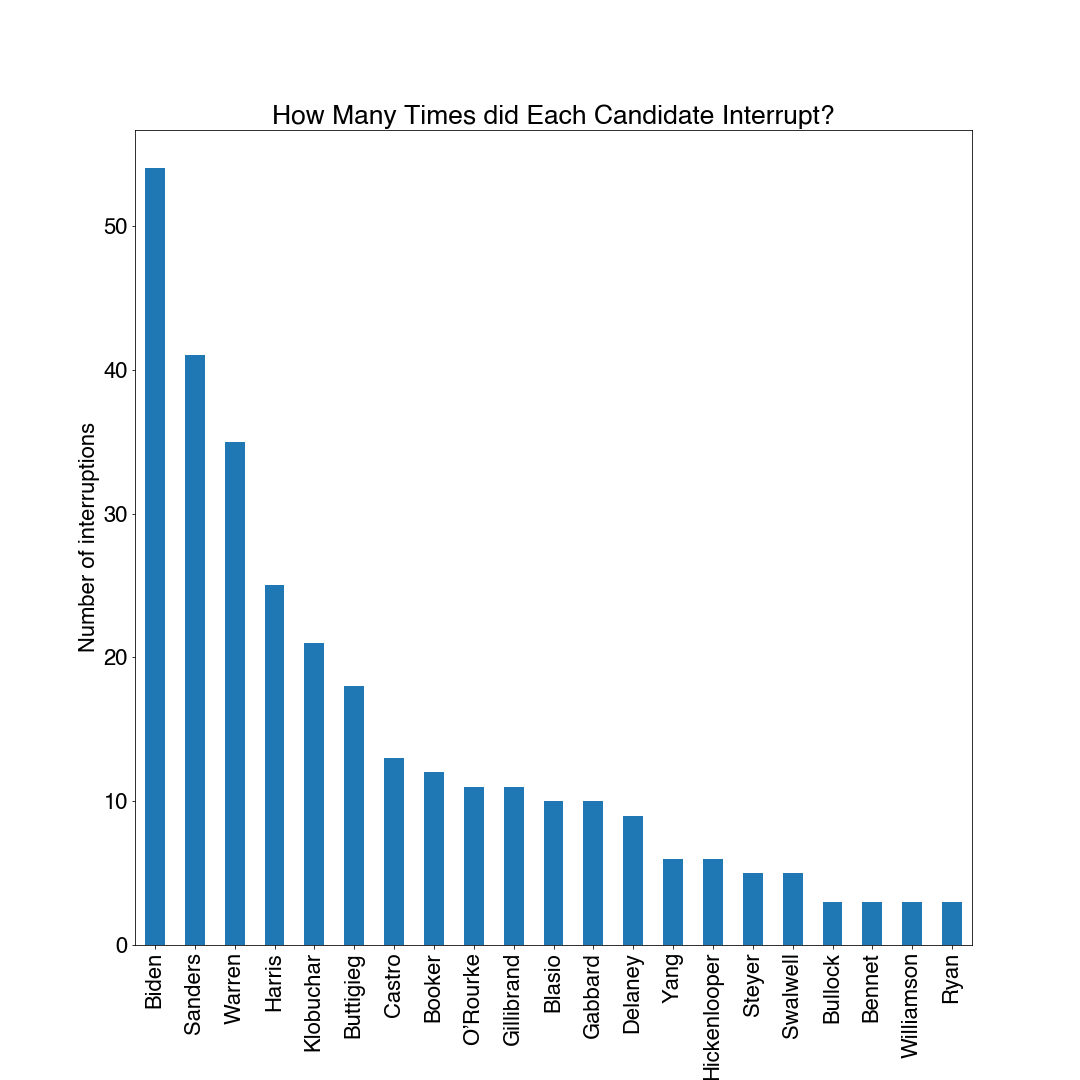 Joe Biden has interrupted his peers 54 times over the past 6 debates, out of the 278 he said something. In other words, 19% of the time Joe Biden said something, he was cutting off someone else. 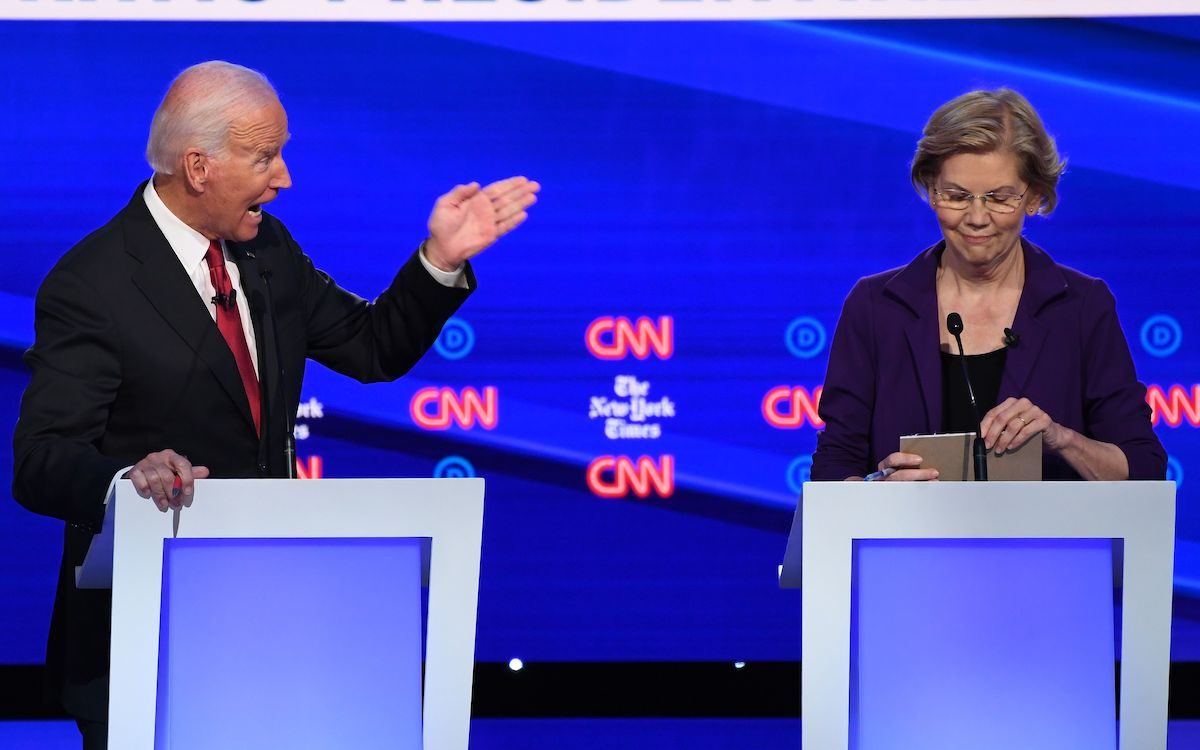 In his defense, I took a look at what he said during these interruptions, and many were responding to criticisms by other candidates.

While Joe Biden has a high number of interruptions, other candidates have a high percentage of time spent interrupting. John Delaney only spoke for 15 minutes and 6 seconds in total, but, 1 minute 57 seconds of that time was via an interruption, which is about 13%. 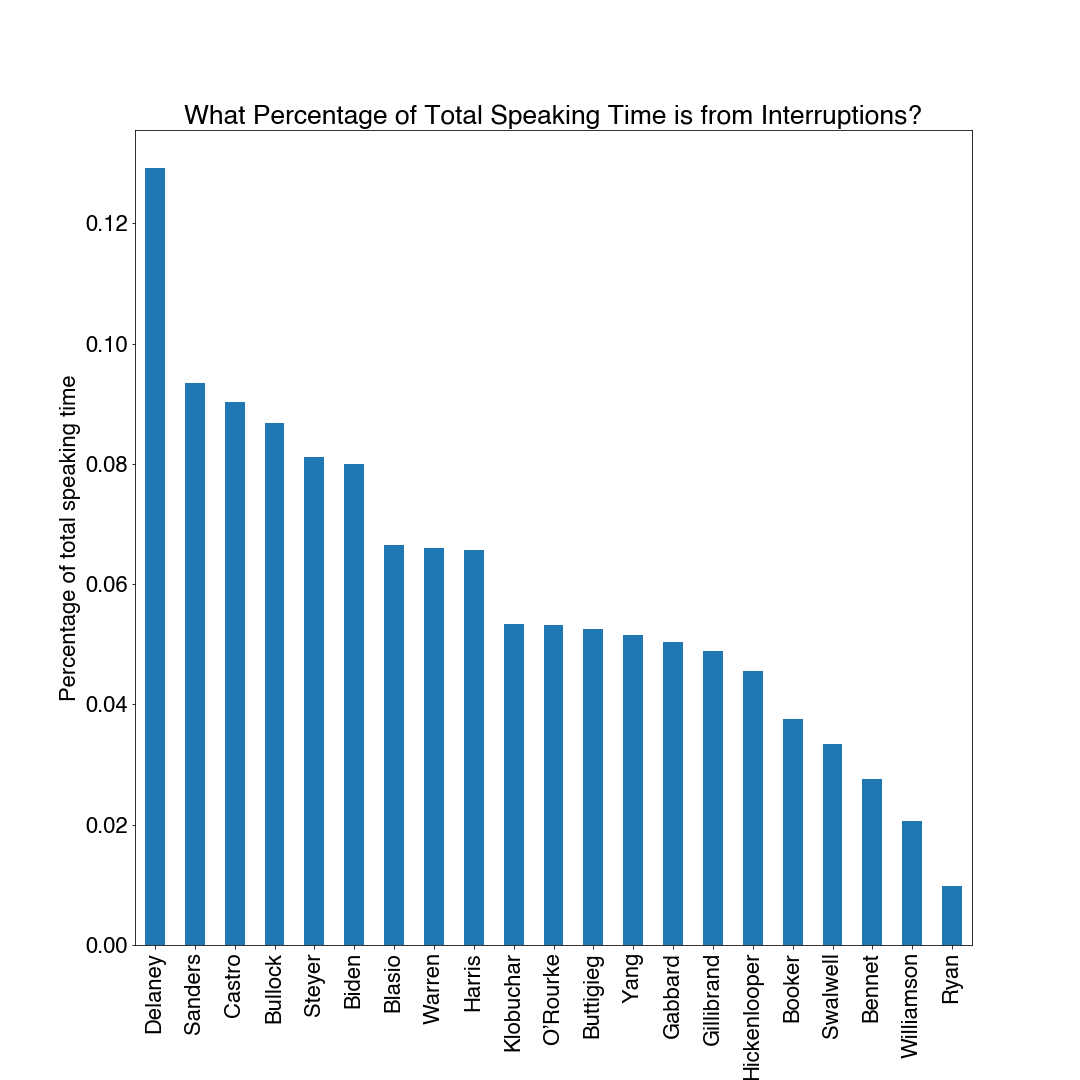 The elephant in the room

Throughout the election democrats have continuously stressed the importance of focusing on real issues rather than just being “anti-Trump”. Did the current crop of democrats follow their own advice?

To do this kind of analysis we can leverage a machine learning task called named entity recognition, which can recognize and categorize important words. Heres an example:

We can use this technology to extract all mentions of a PERSON.

Alright, back to Trump

What do we get if we apply this to the debate transcripts? 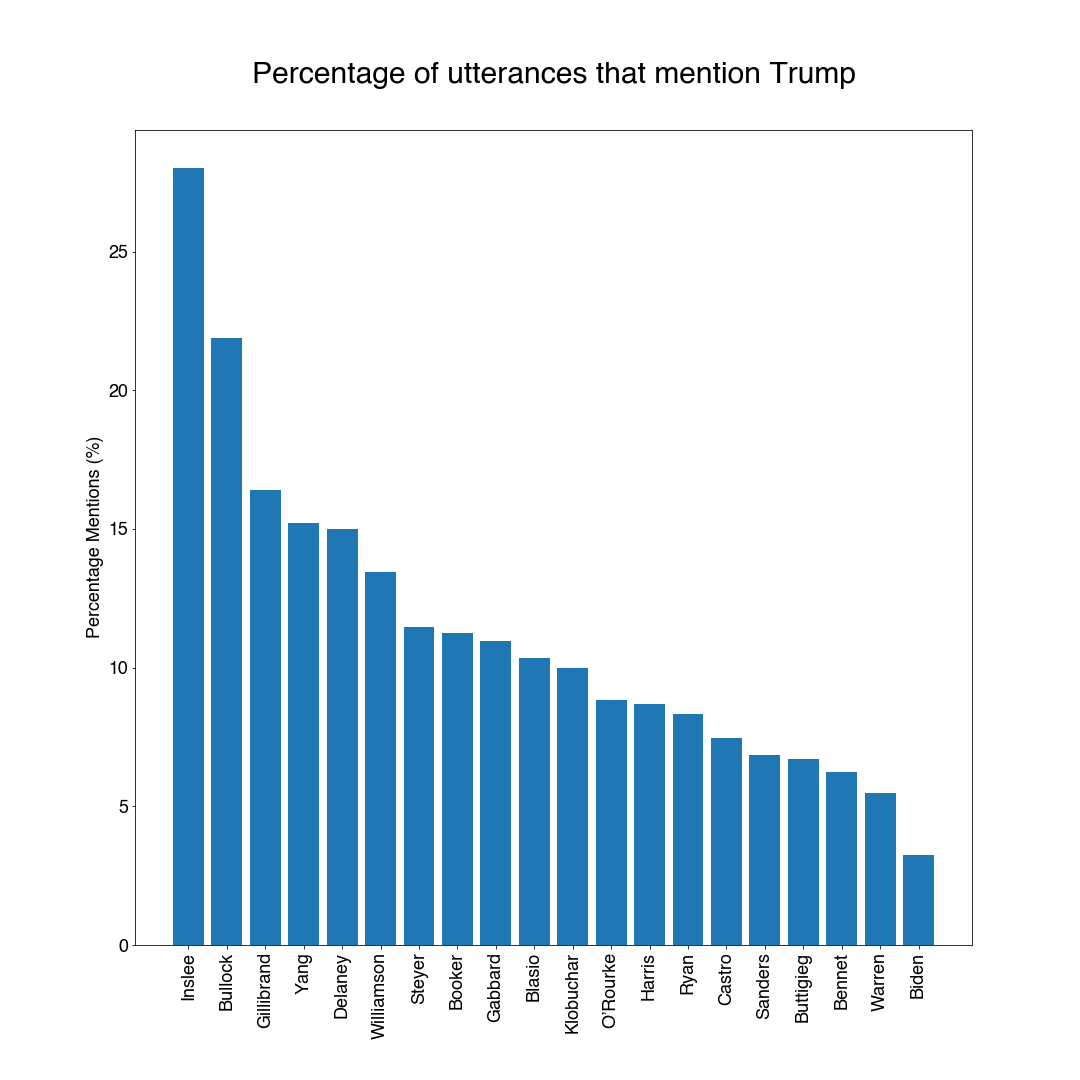 Steve Bullock was only given 25 opportunities to speak, and in 7 of those, he mentioned Trump. Curiously at the top is Andrew Yang, who has stressed the importance of not obsessing over Trump so often that he mentions him at a higher rate than basically every other Democrat. He mentions Trump in 14 out of 92 statements (he says Trump’s name 28 times in those 14 statements).

However, the “top” candidates (who I’m considering to be Biden, Warren, Sanders, and Buttigieg) were less interested in talking about Trump. They only mentioned Trump in about 5% of their statements, combining for 52 mentions out of the 961 times they spoke.

Of people who were mentioned that were not on stage, Barack Obama leads with 27, which is more than all but 6 candidates. Mitch McConnell (13), Vladimir Putin (9), and Robert Mueller (8) round out the top 4.

Interestingly, we can also paint a picture of current American foreign policy, by looking at foreign countries that were mentioned. 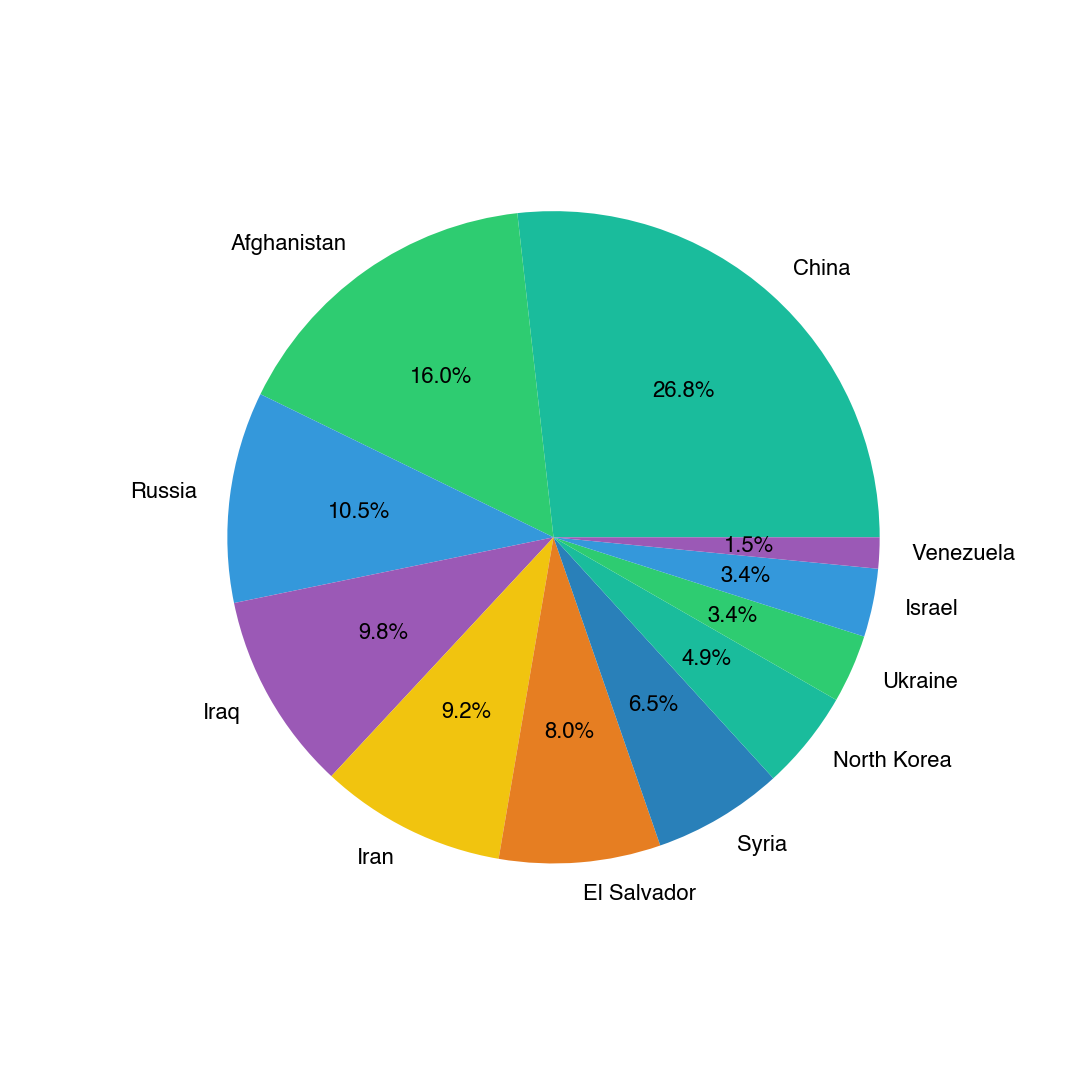 It is often said that as candidates become more popular in the polls, other candidates will “attack” or reference them more often in debates. Pete Buttigieg’s latest debate comes to mind. What happens if we plot each candidates poll numbers against how many time they were mentioned in each debate? (Doesn’t include moderator mentions). 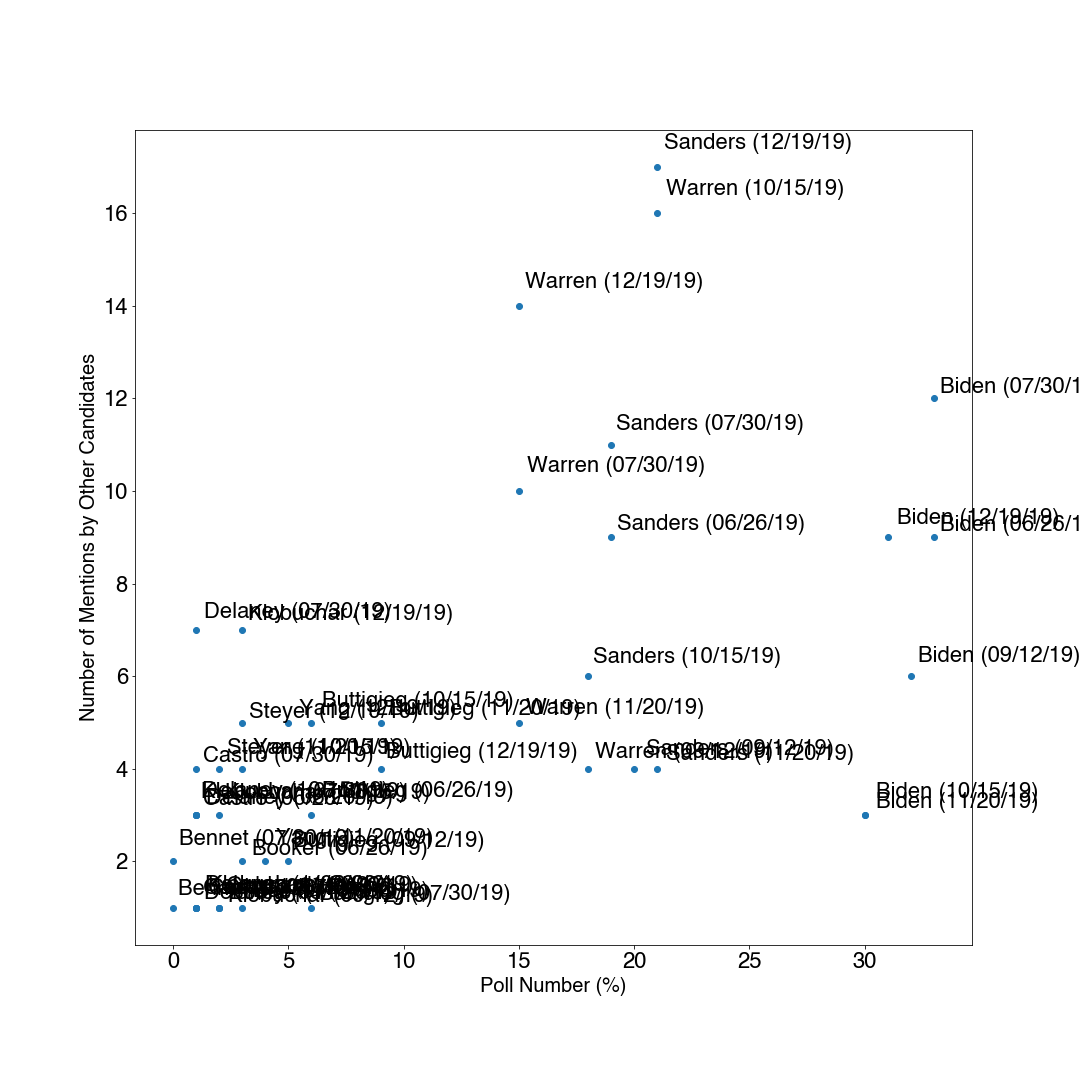 In general, there is some correlation that exists, but it isn’t strong (r-squared = 0.35).

The top right of the graph shows candidates who poll well who are mentioned by their peers often. The data suggests that if you are mentioned a lot, you are probably polling well. However, some candidates to manage to fly under the radar. Joe Biden and John Delaney were mentioned about the same amount during the fourth and fifth debates. Biden polls around 30% while Delaney polls at around 0%.

Every other post about NLP seems to have one of these sections. To this day I’m not sure what word clouds could actually be used for, but they certainly look cool. Here are a few I found interesting. 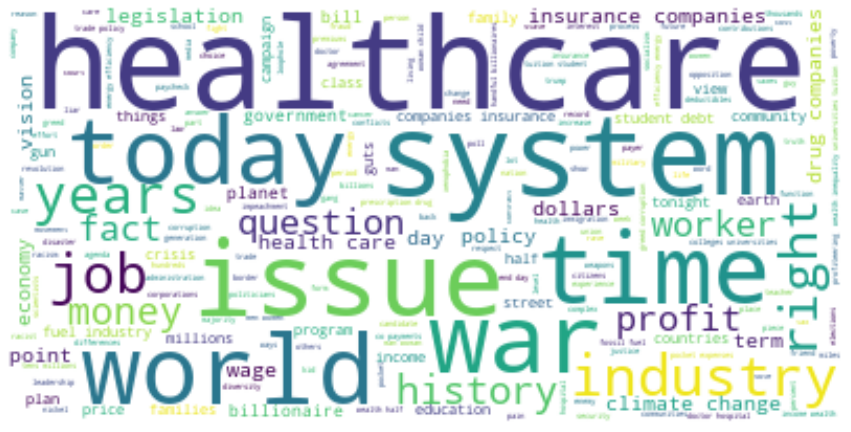 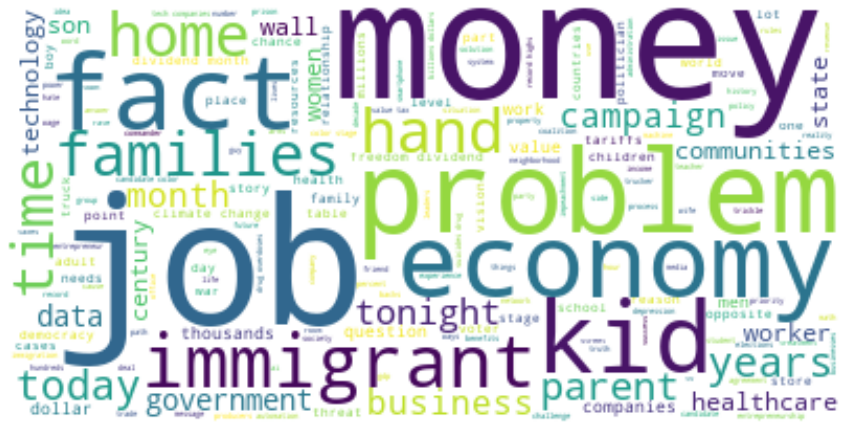 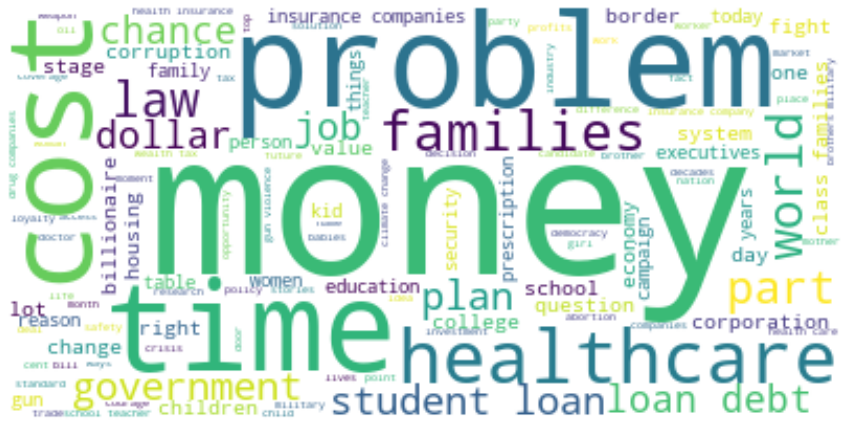 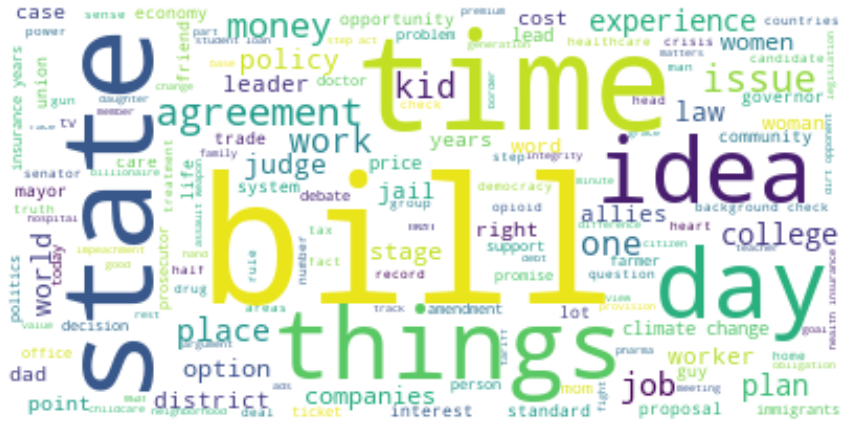 Here’s Joe Biden’s in the shape of a kangaroo. 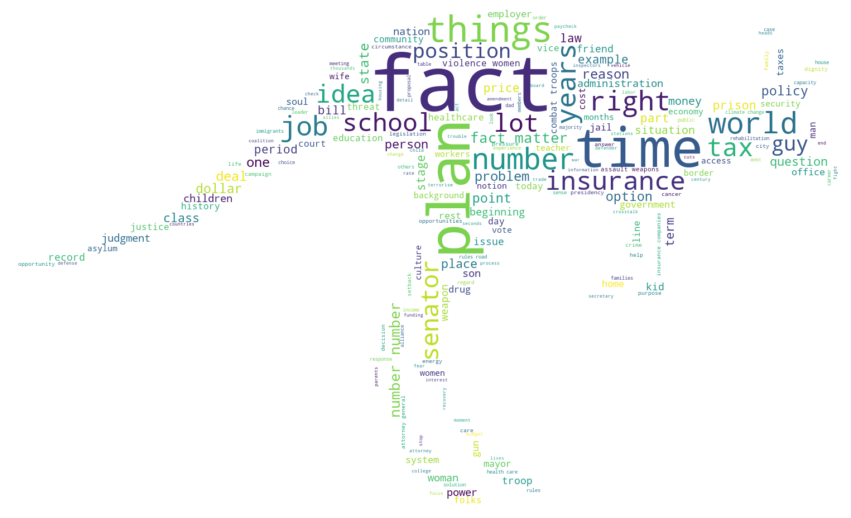 These animals are having a hard time in Australia right now. If you enjoyed this post, please consider paying it forward to an organization helping with the crisis. Here are a couple to get you started: 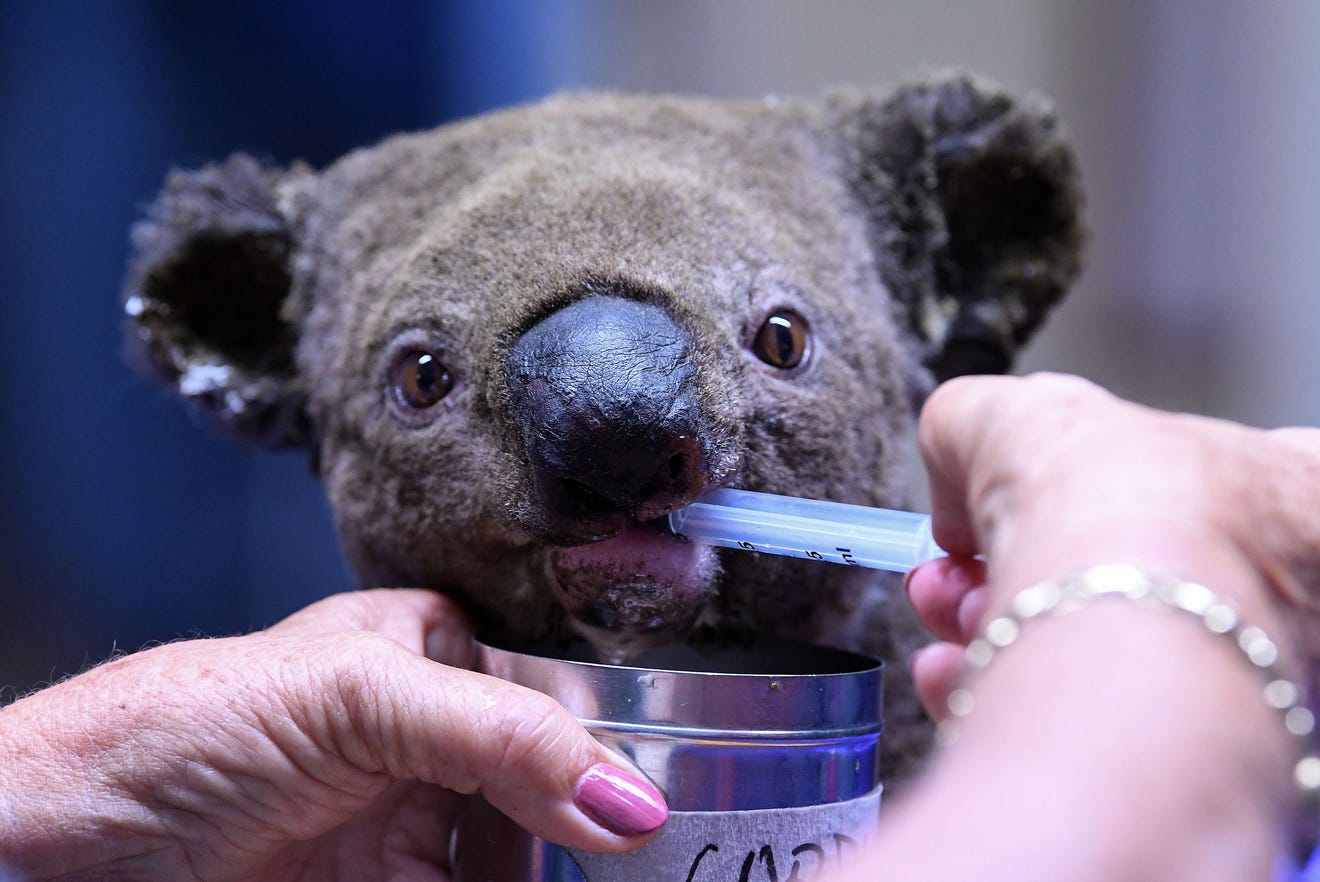 Find the code for the project here. Images are here